Nearby May corn traded 3c lower to start the week, closing at $3.2775. New crop December corn was down 2.5c, closing at $3.4825. The corn market continues its steady grind lower, now sitting around 50c off of where we sat a month ago ahead of the escalation of the COVID-19 global pandemic. Localized news in corn has surrounded the nationwide slowdown of the ethanol industry stemming from the Saudi Arabia/Russia oil production spat which led crude oil to its biggest collapse since the Gulf War in the early 1990s.

Outside of the macroeconomic events pressuring the markets, the big story last week in corn was of course the Prospective Plantings report last Tuesday which estimated 2020 corn plantings at 97M acres, up from 89.7M planted last year. Assuming a demand cut for this crop year of 350 million bushels (Ethanol usage down, offset slightly by increased feed usage), and a trend-line yield of 176 BPA this fall, that would leave our 2020/21 carryout north of 3 billion bushels, and a stocks/use ratio of 21%. This is also assuming a return to 2016-17 export levels and more normal ethanol usage. Obviously this is a very early look at these fundamentals as many key growing regions are yet to begin field work plus there is an entire growing season to account for, but it is worth keeping an eye on just how bearish this situation could become.

In the near term, reports to look out for include weekly Crop Progress reports starting this afternoon at 4 p.m. EST, and the April WASDE report out this Thursday at 12 p.m. EST. Important figures the trade will be looking for in this week’s WASDE are ethanol demand as well as a look into South America’s safrinha corn crop prospects.

In technical action, the market is oversold in the short term. Front month May corn broke through a support level at $3.35 late last week. Support is seen at $3.25, a low set in May of 2019. Beyond that downside targets would be $3.17 and beyond that at $3.00. Both lows were set for front month corn in the fall of 2016. To the upside, nearby resistance is seen at $3.40 and beyond that in the upper $3.50s and low $3.80s. In managed money, the funds position is estimated at short 100k contracts of corn. 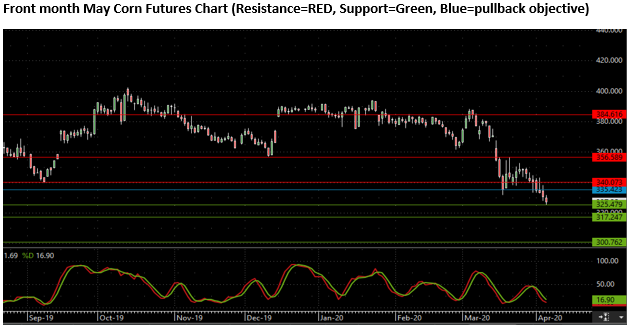 Old crop May soybeans traded up 1.25c today, closing at $8.5550 new crop November soybeans traded up 3.75c, closing at $8.6525 to start the week. Much like corn, the feature last week was a large acreage estimate released by the USDA at 83.5M acres, up from 76.1M last year. The biggest question to me right now is how much does last week’s report in itself change planting intentions on the farm. Another figure to keep in mind is the soybean/corn price ratio. Early in this calendar year that ratio of November soybean price to December corn price was hovering around 2.25-2.3 usually indicating a lean towards corn acres. However, recently that ratio has shifted to closer to 2.5 as the corn market has moved downward faster than the soybean market. This ratio would indicate closer to “traditional” rotations, so given this trend it brings up big questions regarding the USDA estimates from last week and it will be interesting to watch what adjustments are made by the USDA as the planting/growing season progresses.

In fundamental news, Brazil is coming off of a massive March in terms of soybean exports to China, all coming in the midst of fears that the COVID-19 pandemic would shut down ports and limit export business. The U.S. ethanol collapse has opened the door for improved soymeal demand, keeping domestic soybean crushers in the market for beans, but the big question is with the African Swine Fever hitting China demand followed promptly by the COVID-19 pandemic, combined with cheap post-harvest Brazilian soybeans, where is the opportunity for U.S. exports. The USDA export number of 1.8M bushels isn’t impossible but current sales to China are little to nothing and will need to pick up in the summer months to hit the estimate. The idea that China will wait until U.S. harvest to buy beans in an attempt to meet the $40 billion objective outlined in the Phase One Trade Agreement still seems like the most likely scenario given the current macroeconomic environment.

In technicals, the market failed at support in the mid to upper 8.60s range. Support to the downside is seen at $8.38 followed by the $8.21 mid-March low. Upside targets would be a pullback to the previous support level of $8.67, and beyond that resistance is at $8.80 and $9.00. Managed money funds are estimated at long 23K contracts of soybeans.