It should come as no surprise that grain traders have experienced substantially more intraday volatility while desperately attempting to quantify fundamental inputs during a weather market. That being said, it is always important to take a pause on the fundamentals to pay attention to the technical indicators as they relate to the momentum shifts. Today we are going to take a quick look at the slow stochastic and what it may be communicating to the market as a relates to momentum in SX19 soybean contract.

With the contract now 80+ cents off its lows, momentum to the upside has pushed the contract into what is referred to as “overbought” territory. As buying momentum has slowed and managed money appear to have had their fill in cleaning up a short position temporarily the stochastics are coming in tonight as a “cross” which technicians view as a sell signal. It is equally important to note that his does not guarantee a sell off, but in most circumstance is the precursor to the market backing off from the current levels as buying interest reverts toward normal levels.

The markets have already had similar crosses this week in the CZ0 and SX0 contracts, and the following price action has been evident, although fueled potentially by fundamental factors. 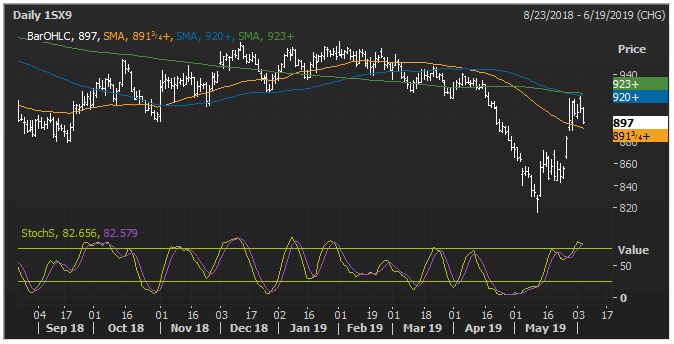