Bean prices continue to hang out near the low end of their recent range. Major moving average support along with hopes of a trade truce and surging bean oil prices have allowed beans to hold onto most of their fall rally despite loses across other parts of the sector. The bean market is clearly waiting for fresh information as volume declines and prices stick.

The bean market saw a nice two-month rally where prices gained 90c in 25 sessions. However, the push higher left the market deeply overbought and once bullish news dried up the upward momentum waned. Since then prices have set back to the upper Fibonacci band and have done a good job of correcting that overbought condition. Now the question becomes whether the market will deepen its correction, or has the healthy set back opened the door for the next leg higher?

Looking at the chart the major moving average support from 913-930 will be closely monitored from the downside perspective. While the double top at 960 is the clear upside breach target.

Soybean futures have done exactly what one would expect after a strong rally. They’ve set back to initial support, solved the overbought condition, found fair value, and now await a new driving force. Tomorrow’s USDA report could offer that driving force, but ultimately beans will take direction from Trade war progress or lack thereof. Keep an eye on the moving averages short term. 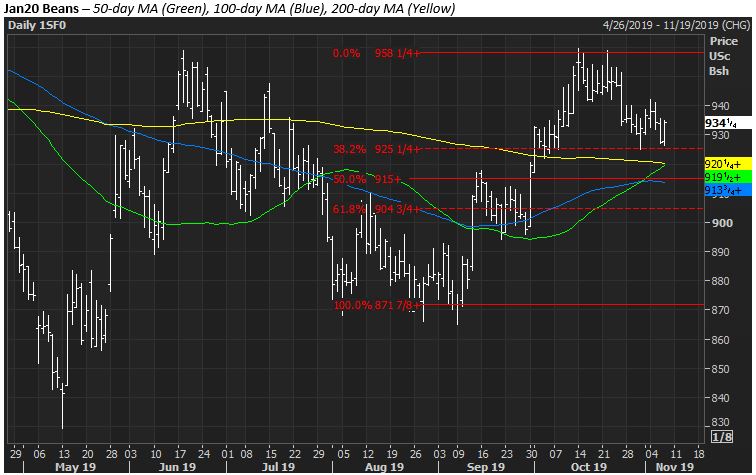