A rare quiet session for beans which spent most of today within a four-cent range just above unchanged. The market has been on a three-day long liquidation craze as prices are 82c off last week’s highs. Prices seemed to have found fair value indicated by buyers on the lows yesterday and sellers on the highs today. But with the market just above initial support, and acting similar to the last two corrections, how we finish the week could be an early sign if more corrective downside remains.

The bean chart shows this week’s correction as a relatively minor step back in an otherwise massive upward trend. In fact, we’ve seen very similar three-day spells of liquidation before each of the last two legs higher. This could be a similar set up but holding here is key.

If we look at each of the past two corrections the market was able to hold the lows of that third day of selling. This makes yesterday’s low at 1352 (the third day of this correction) a key mark to hold. If we manage to say above it, we could see a similar outcome as the last two corrections. While failing to hold 1352 would alert the market that something more than just liquidation is going on.

The ole three day sell-off is as simple as it gets. Maybe too simple in the world of algos and record open interest. In any case It’s an important session for beans tomorrow. Let’s see if yesterday’s lows can hold. Stay tuned. 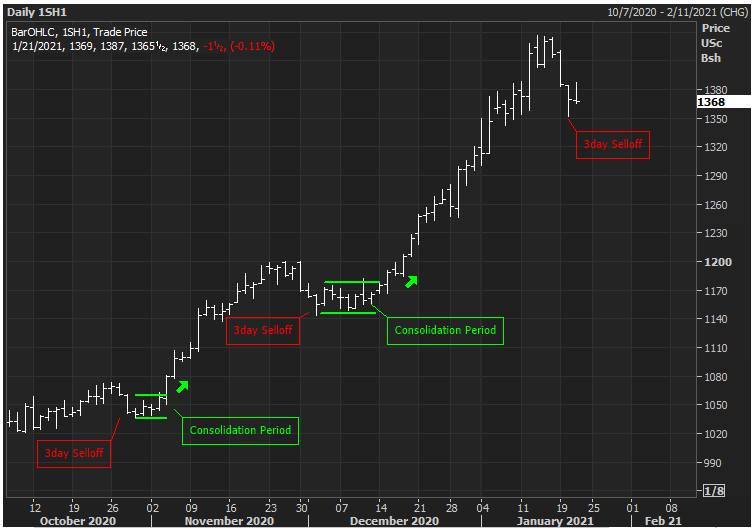