Rough Monday as the Dow is down over 1,000!  Starting the grain market the same way we ended last week, in a slump. CBOT closed March corn down 4.75, March beans down 16.25 and March wheat down 14.75 following news of more coronavirus cases being confirmed. Taking all three commodities below the most recent support levels.

This is the final week of the crop insurance price discovery period. Will farmers face a guarantee below their cost of production?  It’s a depressing reality some may face.  President Trump tweeted Friday about the possibility of more aid to farmers as they wait for the Chinese trade deal to take effect.  USDA would likely base that off the first two rounds. The MFP payments indirectly could be keeping grain off the market as the aid supplements income.

Logic would tell you China has to buy pork from the U.S. considering their diminishing herds, yet last week they purchased 1700 mt.  (It’s estimated Chinas hog population down 195 million from 2018 and to decrease another 80 million this year.)  China was also absent in corn purchases last week, as Ukraine shares equal FOB values with the US but considerably cheaper freight.  Japan being the largest buyer of US corn last week at .504 mmt.  Friday had rumors of at least 5 cargos of soybeans off the PNW due to a logistics issue in Brazil but nothing is confirmed.

Wheat had a stellar day last Wednesday closing up .24 but to date has given back more than half of that gain. The Ag Forum, poor export sales, technical charts and competitive world prices are contributing to the negative tone.  The Ag forum also forecasted this year’s soybean planted acres at 85 million, a 9 million acre increase over last year. They pegged corn at 94 million acres, which would be a 4- year high.

In other news worth mentioning The USDA is planning to tweak the way its National Agricultural Statistics Service (NASS) reports data to increase accuracy.  The USDA also reports the Agbarometer (a measure of farm optimism) shows US farmers optimism is at an 18 month high following their low in May of 2019. 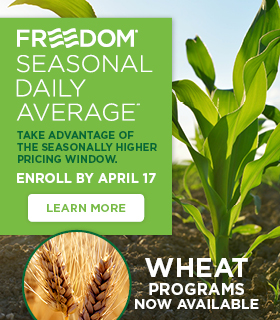