Old crop July corn traded 2.5c lower to start the week, closing at $3.2325. New crop December 2020 corn (CZ20) traded 2.75c lower closing at $3.3575. The big story in commodities today is the Trump Administrations comments on Friday regarding revoking Hong Kong’s trade privileges with the United States. Friday’s comments coupled the overall rising tensions between the U.S. and China over the coronavirus pandemic had the markets on edge Friday afternoon and this morning. Corn traded as low as 8c in the red this morning before reversing to close only slightly lower.

The Ag markets choppy action in the past few weeks is indicative of the overall sense of uncertainty in the economy right now. For now, the market seems to have found a bottom but is obviously resistant to move too much higher with the coronavirus pandemic’s full economic impact still looming and most of the growing season still ahead of us.

Much of the Midwest saw heavy rains last week, slowing planting progress in a year where we are quite a bit ahead of pace. Corn emerged is ahead of the 5-year average as well, but from what I have been hearing the rains last week did little to no harm to the crop already planted. Weather here in the nearby looks to turn hot and dry over the first half of June. The next crop progress is out this afternoon at 4 PM EST.

In demand news, the ethanol industry has recovered slightly from the rash of shutdowns in March, stocks are down and production was the highest last week since the March fallout. The USDA has reduced corn demand for ethanol by 475M bushels since its March report. The USDA is also forecasting a decrease in U.S. agricultural exports valued at $3B, due to impact of the coronavirus pandemic.

In technicals, July corn has been slowing moving higher, and a slight uptrend channel seems to have formed. The big up day last Thursday pushed the market to price levels not seen in over a month, which just illustrates how stagnant the market has been in the past 30 days. The 50-day moving average at $3.30 caused resistance but the market today held up well at trendline support at $3.19. If support fails, the downside target for the move would be $3.15 below that at $3.10. The target to the upside is the 50-day MA at $3.30, any move above that resistance the next target would be the $3.40 range last traded the first week of April.

July soybeans SN20 traded down a quarter cent today closing at $8.4050. New crop beans (SX20) traded up half a cent, closing at $8.5225. The trade today was a little surprising considering the first news this morning was that China is directing its state firms to halt imports of U.S. soybeans and pork, in response to Trump’s comments on Friday regarding Hong Kong. Planting delays due to last weeks heavy rains may be causing some support today as there is some concern over the last of the soybeans getting in.

The tensions between the U.S. and China have a lot bigger impact on soybeans than corn, which is why is it interesting that corn traded further negative today while beans held up from early session losses to close near unchanged. With China buying record numbers of soybeans from Brazil through the pandemic. Adding in today’s headlines it seems more and more unlikely that the commitments outlined in the Phase One trade agreement are attainable. Soybean shipments from the U.S. are up 3% year over year but total sales are lagging 9%.

In technicals, front month July soybeans (SN20) continue to struggle around the $8.50 level, failing there 3 times during the month of May. Much like corn, it appears for now that soybeans have found a bottom with support at $8.30. If that support fails, the next downside target would be $8.20-$8.22. Any rally to the upside would be met by resistance at $8.60 and above that at around $8.77. 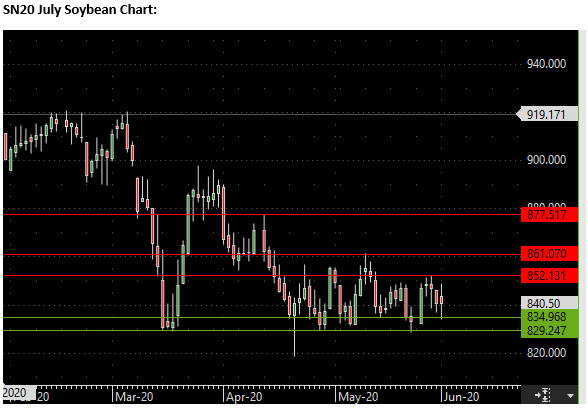