December corn (CZ20) traded 3.5c higher today, closing at $4.0875.  The market continues to push higher despite ideal harvest conditions and rapid harvest progress, as well as the market being technically overbought. The market is approaching last weeks high of $4.09 and beyond that one would have to scroll back to this time last year to find the CZ20 contract trading at these levels. December corn also hit its calendar year high for the first time in 31 years last week.

Harvest progressed to 60% complete nationally in yesterdays Crop Progress report. This is a 19-point increase week over week and came in 3 points ahead of the trade guess. Yields seem to be a mixed bag overall; Iowa farmers are seeing yields all over the place in the aftermath of the Aug. 10 derecho storm. From where I sit in Nebraska irrigated corn yields have been very good for the most part, but the farther west you go the dryland struggled through a very hot June and dry late summer. The corn market has now rallied over a dollar since mid-August, the September stocks report that led to around a 300M cut in the 2020/21 ending stocks continues to provide support to the market.

Export pace for this time of year is almost double last year’s pace. The big unknown is China, the overall feeling is that their secret state reserves are much shorter than originally thought and China will need to be in the market to import corn to replenish. Add a world economy recovering from a pandemic and corn demand should see a very nice rebound from the past couple years’ struggles. Ethanol will be important to watch as corn prices rally margins may get thin again. At a 2.2B bushel carryout we will still need every bit of demand we can get so another ethanol stumble like we saw in March would be a big hit to an increasingly bullish scenario.

In technicals, the market this week has traded through resistance on the front month corn chart at $4.02 so the price action today/tomorrow will be important to watch as the market does feel overbought based on the indicators below. Any continuation of the rally will have an upside target of $4.15. If you want to get really bullish the front month corn high last summer was $4.6425 in June. On the flip side, the market does feel due for a correction, any break in futures would have support at $3.95 and below that at the upper $3.80s area. Managed money is estimated long around 200k contracts of corn, the longest position since the 2019 summer rally. 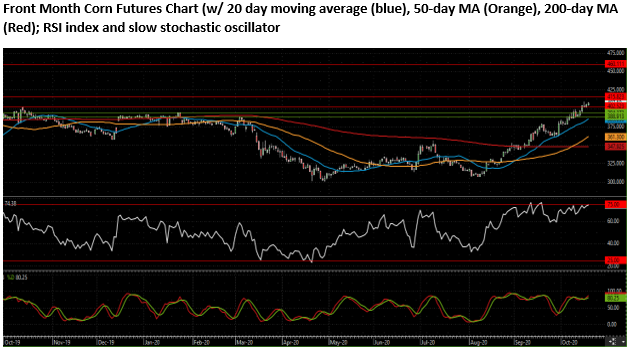 November soybeans traded 9.75c higher today closing at $10.64. The market has more or less ignored better rain coverage in South America. The big driver in soybeans continues to be huge levels of demand. Currently, 2020/21 export commitments are just over 1B bushels ahead of the pace for this time last year. The USDA increased its export expectation in the October WASDE but as of now they are lagging considering the potentially record setting pace we are seeing for sales with China of course being the main buyer. Domestically, September crush volume was also a record for the month of September. In other news, Brazil has lifted tariffs on soybean imports to attempt to alleviate domestic shortages. This South American growing season will be all important as it will set the tone for U.S. bean demand to China next spring when typically, that business goes to Brazil. As mentioned above, adding a world economy recovering from a pandemic shutdown may act as catalyst to bolster demand at least in the nearby side of things. As for 2020 U.S. harvest, yesterdays Crop Progress pegged harvest at 75% complete, up 14 points week over week. From where I sit in Nebraska, harvest is more or less finished and yields in the central part of the state were very good, but similar to corn the farther you move westward the dryland beans struggled and hail damage is prominent.

In technicals, the market has now rallied over $2/bushel since the August WASDE report. Last week we traded above levels not seen since March of 2018 at $10.79. Like corn the market feels overbought in the short term but for now keeps pushing higher. The target to the upside is last weeks high of $9.79 but beyond that one would have to go back to January of 2017 and June of 2016 to find the last time front month beans traded higher than $9.80. Managed money is estimated long 240K contracts of beans. 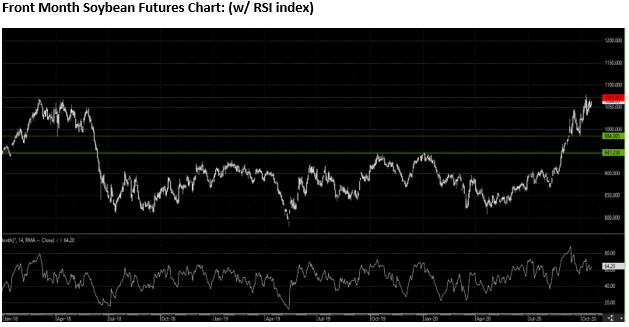