Corn followed the bean market lower today after last weeks surge 35c higher post the bullish WASDE report last Tuesday which saw the USDA cut the 2020 corn yield 3.8 BPA, but also saw them cut total usage by 250M bushels, a move that was most likely to avoid publishing a rationing carryout this early in the year with S. American harvest still around the corner.  Many private analysts are estimating heavier demand than the USDA is showing as have much more aggressively bullish carryouts in the 1.3B bushel range. These estimates have kept traders bullish and kept prices well into the $5.00+ territory. The net result was still a 150M cut to the 2020/21 ending stocks, further supporting the rally in prices through last week. With ending stocks of 1.552B, the stocks/use ration now sits at 10.6%. The lowest it has been since 2013.

The managed money corn long is estimated now at 415K contracts, rapidly approaching the record of 429K contracts. In technicals, the market broke through and held above the $5.20 high which was a level from 2014. For the move resistance will be seen now at last weeks $5.40 high. We do still have a small 1.75c gap from $5.1725 to 5.19, which is certainly a target to keep in mind for any potential correction nearby. Beyond $5.40 the next target would be a 2013 peak of $5.63 front month futures, but keep in mind that would correspond with a shorter carryout than the USDA is currently projecting at 1.55B. 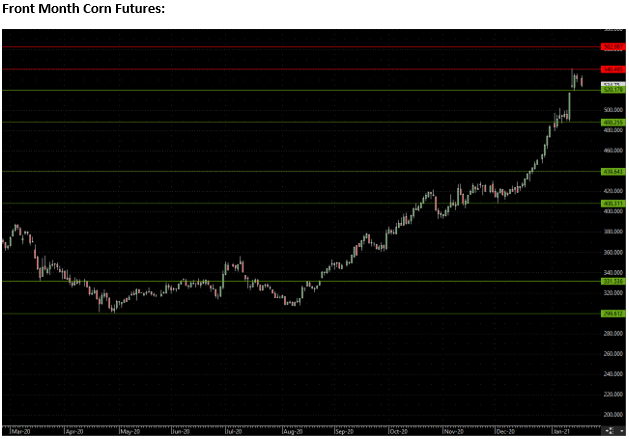 It has become a pure weather market as the majority of the areas in question in South America received decent rain coverage this past weekend, which has the market retreating and taking back most of the gains post USDA report last Tuesday. I think the struggle in the market today is trying to find a fair value given what we know today. The report last Tuesday was certainly bullish, but with ending stocks coming in right at the average estimate it perhaps was not AS bullish as some traders were expecting. Similar to corn the carryout/use ratio is the tightest since 2013, but the USDA seems content to steadily trim the carryout until South America’s harvest gets going and we get more concrete numbers to back any speculation of a short crop. Much has been made of comparing this year’s price movements to movements in 2011 and 2008, they are very similar in terms of price action, the differences are 2011 stalled out at around $14.00 while 2008 kept running. It was South American rainfall leading into harvest that was the difference in 2011, so expect that to remain a huge daily story for the next few weeks moving forward.

In technicals, the market was rapidly approaching the May 2014 peak of $14.46 but hit a ceiling about 8 cents shy of that level. That would be the target to the upside on any renewed SAM concerns. The market is very overbought in the short term here and was due for a correction we saw today, any further drop to the downside would have support at $13.60-13.50 and further to the mid $13.30s, a former resistance line from late summer 2014’s selloff. 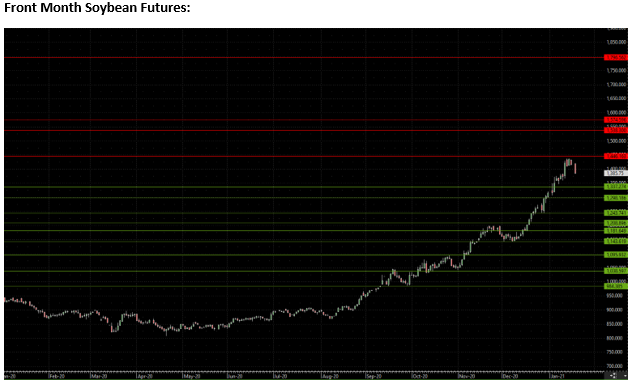