Corn futures took off mid-morning back towards the peak set back at the beginning of the month before losing steam mid-session but still closing higher. Corn felt like it was more along for the ride this morning with the soybean complex leading the way higher. The market is patiently waiting to see if China will have to step in and buy some corn. The Biden-Xi virtual summit sparked renewed optimism of renewed commitments toward the Phase One Trade Agreement. Meanwhile, China has not bought U.S. corn now in 6 months and U.S. corn sits among the most expensive in the world. This with a stronger dollar is fuel for the bears moving forward. Meanwhile Brazil is looking to recover from a historically drought stricken 2020-21 corn crop. It is worth mentioning/reminding that while the U.S. enjoyed a very good export demand year last year, Brazil had an very down year, so expecting that to perhaps shift to the median is not out of the question with Brazil looking to recover on corn production.

In technicals, the market today peaked out towards the short term high of 5.86 set back on 11/2. The market was not able to sustain this topping out 2c shy of that before settling 8.75c off the high for the session. The market again seems overbought in the short term, trendline resistance as well as the three major moving averages are consolidated in the 5.30-5.50 range. As mentioned in previous articles the carryout at 1.493B seems to have the market doing a balancing act waiting for the next piece of fundamental news to decide if we need to trade higher or lower from here. Any bullish news would set $6.00 as the upside target and beyond that the summer high for CZ21 of $6.38. Should momentum shift the other direction the $5.30-$5.50 mentioned above will be a target. Beyond that the bearish will be circling $5.0675 reached on Oct 13th and $4.9750 traded to on September 10th. 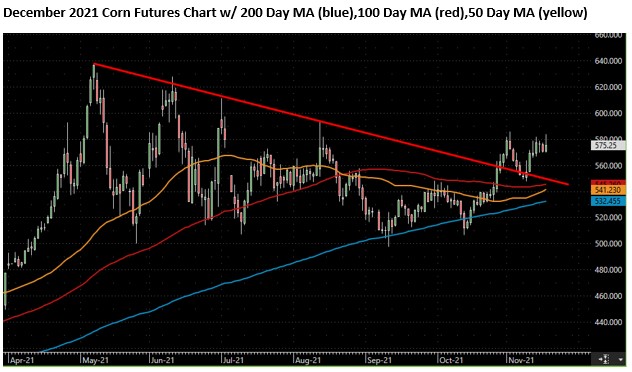 The soybean complex had a strong day across the board, led by soybean meal as it continues is month long rally now up around $65/ton since Oct. 13th.  Like corn, soybeans traded stronger earlier in the session but lost steam on some mid-session profit taking settling 12c off the highs. Soybean export business has ramped up in recent weeks, the U.S. now sits 200M behind last years pace with the USDA penciling a year over year decline of 215M bushels exported. Like corn, South American weather is key moving forward as we brace what appears at first glance to be a bumper crop of beans coming in Brazil. Will also be interesting to see with U.S. harvest more or less done on soybeans how the final yield shakes out. I may be biased by how great beans turned out from where I sit in central NE, but I found it curious how the USDA cut the yield in the November report.

In technicals, the market has extended into overbought range again after rallying a dollar in seven sessions. The market ran through the 50-day moving average today which had provided resistance to the move yesterday. Next upside target for the rally will be the 200-day moving average at $12.97 and obviously $13 will be a level the bulls will be watching. To the downside, a move back below the $12.54 50 day moving average seems like the logical first target for bears and beyond that probably looking to $12-11.80 range for a downside target.